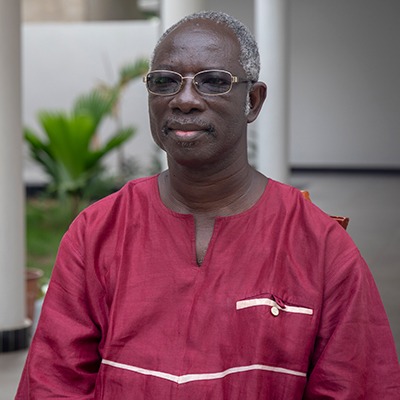 When I was a boy, I knew that a lot of blind people lived in the north of Ghana. I didn’t understand that it had to do with the transmission of river blindness by black flies. In fact, it didn’t occur to me that there was anything to understand. That’s just the way it was.

I grew up in a diamond-mining town full of open pits where, as kids, we liked to go swimming. We didn’t realize that the snails that lived in them carried flatworms called schistosomes that infected our intestines and urinary tracts. When my parents noticed blood in my urine, they got worried and took me to the hospital, where I was treated with injections 11 days in a row. Then I went back to swimming in the pits. That’s just the way it was.

In 1976, I was studying entomology at the University of Science and Technology in Ghana, and for my first-year internship I was assigned to a lab where the World Health Organization (WHO) was ramping up its brand-new Onchocerciasis Control Programme for West Africa. It wasn’t my choice, but I like to think it was fate. Onchocerciasis, or river blindness, was the disease that had made all those folks in Northern Ghana blind. And I suddenly understood that being tormented by parasites like oncho worms or schistosomes didn’t have to be “just the way it was.” For the first time, I began to see the routine sickness that characterized the lives of so many people as a problem we could solve.

The right opportunity at the right time

I have spent the last 45 years working on solutions for river blindness and other neglected tropical diseases (NTDs). Our community has celebrated many victories. We have graduated from merely trying to control onchocerciasis to trying to render it insignificant as a public health problem to trying to eliminate it—period. Last year, data from Niger showed that the country is on the verge of becoming the first country in Africa to end onchocerciasis. They are currently writing up their dossier for WHO to verify that onchocerciasis transmission has indeed been eliminated. Several other countries, such as Senegal and Mali, are close.

But 45 years is a long time. People are tired. Funding is unstable. Governments have other priorities. We need to end river blindness and other neglected tropical diseases, and we need to do it soon. Otherwise, 45 years from now we may find ourselves back where we started: Resigned to preventable suffering because that’s just the way it is.

We have the tools we need. The priority now is to deploy them in the right way to get to elimination. The global NTD community is coming together in Kigali, Rwanda, this week to discuss precisely how to do this.

From the starting line to the last mile: River blindness prevention and control

The work in the late 1970s—the early days of the fight—was humbling. I visited many communities where most adults were visually impaired and many children had dropped out of school to care for them. Some villages were completely abandoned, even though the land was some of the most fertile in the country, because they just weren’t safe for habitation.

At the time, we relied on vector control to fight the disease. To learn more about the black flies’ behavior, we had to collect female flies that had just blood-fed, which entailed letting them bite us until they were fully engorged with our blood. I cannot vouch that none of those flies were infected with onchocerciasis volvulus!

Sometimes, we rowed around fast-flowing rivers, which are the breeding sites of the vectors, in canoes, with a drum of larvicide to kill the larvae of the vectors. Other times, our teams sprayed the larvicide from helicopters. Every Monday at 7am, we held our weekly debriefing. We’d talk by radio to people in all seven and later 11 countries where the program was active, discuss the results of the previous week, and make plans for the upcoming week.

Then, in 1987, everything changed when Merck & Co. developed the drug Mectizan (known generically as ivermectin), which kills the baby worms that cause symptoms. (It does not kill the adult worms, which live in the body and keep producing larvae for 12 to 15 years.) With a simple pill, it was now possible to keep onchocerciasis from making people sick, even if it didn’t “cure” the disease. When Merck established a program to donate Mectizan to help low-income countries fight oncho, we could start to think beyond mere control as our ultimate objective.

Since the 1990s, the main weapon against river blindness has been what’s known as mass drug administration. At regular intervals, everyone living in areas that were once endemic with river blindness receives Mectizan. Mass drug administration works—river blindness now makes very few people blind—but, as the word “mass” suggests, it can be a very blunt instrument. We administer drugs in some communities where there are no worms. Conversely, in some communities where there are worms, we may not administer drugs.

To get all the way to zero, we need to get smarter about using our limited resources.

In my opinion, the most urgent priority is nationwide disease surveillance studies in endemic countries so governments can find out what they’re really up against. They need to know where disease is still circulating and where it’s not, so they can target their resources to the actual situation on the ground. This is critical not just for onchocerciasis but for a wide range of endemic diseases. And for this to happen, some decision-making power will have to be transferred from donors and the nonprofit partners they support to local governments.

At the Kigali Summit this week, the delegates are going to talk a lot about “local ownership.” Local ownership can mean different things to different people, but to me it has to mean government leadership putting enough money into their NTD programs that they feel like they have a voice.

I routinely hear about meetings in which the donors and partners try to apply generic WHO guidelines when they should be considering more specific contextual factors, but the program managers who can provide that context keep quiet because they’re not footing the bill. The dynamic needs to be turned upside down, with the locals and government leaders setting the agenda and then pulling in donors and partners for support as needed.

The development community has been talking about local ownership for years, but it hasn’t really happened, at least not in the NTD space. I am glad the leaders at the Kigali Summit will be focusing on it, but it can’t be just a buzzword or a line in a declaration.

It has to be a real commitment that leaders bring home with them because they don’t want their citizens to itch so badly that they scratch their skin off in sheets before they gradually go blind. Because they are serious when they say they don’t want preventable NTDs to continue to threaten the health and happiness of 1 billion children. Because they imagine a future in which nobody thinks of debilitating diseases as “just the way things are.”

The COVID-19 pandemic has taught us many lessons about health security – not the least that, when health resources are scarce, African countries cannot necessarily rely on imports to protect their people.
By Cheikh Oumar Seydi and Dr. Ibrahim Assane Mayaki

Mobile payments to vaccination workers are an important tool in the fight to end polio—a tool that promises to have similar benefits for any number of other public health initiatives.
By Andrew Stein Senior Program Officer, Polio