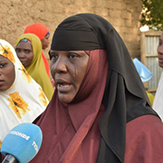 By Malama Ouani
Muslim cleric in Maradi, Niger
More about the author
In Partnership With

This piece was originally published on ONE on October 2, 2019.

Dozens and sometimes hundreds of women gather under the shade of a tree each week to ask me questions.

Most of the women are illiterate. The handful who know how to read and write do not have access to newspapers or books. Radios or televisions are out-of-reach luxuries. And the miracle of Google, of course, isn’t something most of these women have ever heard of.

The little information they have usually comes from their husbands, fathers, or village elders and religious leaders. Usually that information is not very supportive of women’s empowerment, and it tends to bypass topics of critical importance for women such as women’s rights, girls’ education, and the resources available at local health clinics, including family planning.

The impact of women’s lack of knowledge on their own lives and that of their children is evident in a few key data points: Niger has the highest child marriage rate, with three out of four girls marrying before they turn 18.  Niger has the highest teen pregnancy rate in the world. It has the highest fertility rate in the world, with women having seven children on average. Yet, fewer than half of all births are attended by a skilled birth attendant. This dangerous combination has led Niger to be in the top 20 countries in both maternal mortality rate and under-five mortality rate.

I know this is not the will of god or our government. It merely reflects a failure so old that it seems as if it has always been the case. It is a failure I am rectifying in my weekly open-air classes for women.

As a female Muslim cleric who is literate and educated, I can serve as an authoritative bridge, connecting my neighbors with the information they so desperately need and want. I am one of more than 50 female Muslim clerics in Niger teaching such classes through a program launched last year by the United Nations Population Fund.

Most of the women don’t know that Islam is not against family planning.

I tell the women, I am a Muslim cleric, and I have three children – each born roughly three years after the next (currently ages 5, 8, and 12). I did not have 10 children like my mother because I used family planning methods. Go to the local clinic and you too can access health services to improve your health and your children’s health.

Most of the women don’t know that Islam requires that husbands uphold the health, dignity, and rights of their wives.

We see evidence that the information shared at our weekly classes is changing behavior: A woman one week will ask about family planning. And then next week, she might be bold enough to ask me what I use. And then next week, she might ask some questions about how it works. Some women then might take this information back to their husbands to talk about what their family might look like if they planned their pregnancies.

Many of the women are also now discussing how they can enroll their daughters in school. Most of the women don’t realise that Niger’s government requires both boys and girls to attend school until the age of 16. I tell the women, if you want more women doctors serving our community, you must send your daughters to school and keep them in school.

We know that educating girls is the right thing to do. But it is also the smartest investment a country can make. A World Bank study found that every year of secondary school education is correlated with an 18% increase in a girl’s future earning power. According to a recent World Bank report, if all women had at least six years of education, women’s earnings could increase by 8.9% on average globally. With 12 years of education, the gain could be as high as 44.8%. And research shows that educating girls has a multiplier effect.

This year’s Goalkeepers report, released last week by the Bill & Melinda Gates Foundation highlights the slow progress we are making on education globally.

Week after week, we are educating Niger. We are giving these women words to describe their hopes and the knowledge of how to fuel their dreams for themselves and their families.

How to help students get to college in the COVID era

When Africa’s women farmers thrive, everyone benefits: the women themselves, the children in whom they invest, the communities that they feed, and the economies to which they contribute. With the right investments and policies, Africa’s woman-run farms could produce a bumper crop of development.
Ruth Meinzen-Dick Senior Research Fellow, IFPRI
Sign up for The Optimist newsletter
Subscribe to The Optimist to get weekly updates on the latest in global health, gender equality, education, and more.