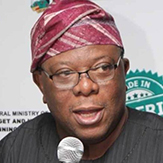 As the Gates Foundation prepares to release its 2018 Goalkeepers Report on Tuesday, Sept. 18, we asked several leading voices to reflect on some of the key issues the report will cover this year. We'll share some of these essays on The Optimist over the next few weeks.

"I paid to serve" (a term we use to explain the value of business leaders who volunteer their time, expertise, and resources) at the Nigerian Economic Summit Group (NESG) for over two decades, before I became the Chief Executive of Nigeria’s oldest and foremost private sector-led think tank.

Having experienced several economic cycles in Nigeria and Africa, nothing worries me personally like Africa’s and Nigeria’s jobless growth.

Last September, when the Bill & Melinda Gates Foundation released its annual Goalkeepers Data Report, accentuating the amazing progress the world had made in reducing extreme poverty around the world, and warning about the difficulty of sustaining it, I and the leaders of the NESG were grappling with how to frame the narrative of an economy that was in shaky recovery and with more people falling into extreme poverty every hour.

As I write, Nigeria has just announced its GDP report for Q2 reflecting a drop from 1.9 percent to 1.5 percent. This news, when coupled with the fact that Nigeria has already overtaken India as the country with the largest number of extremely poor (87.5 million, with 6 persons falling into poverty every minute), is alarming.

It is frightening to think about this but there will be 3.2 million more Nigerians entering poverty by the end of 2018.We account for two-thirds of the world’s poor; that is, 14 of the 18 countries where extreme poverty is escalating are on this continent. The popular “Africa rising” narrative can shift to a narrative of extreme poverty unless we halt the tide.

Recent economic growth in African nations has led to poverty reduction. In 2014 when the Nigerian economy was rebased to $510 billion GDP, the NESG had warned that GDP that lacked depth in jobs, reduction in inequality, and poverty polarisation would only lead to greater socio-economic vulnerabilities.

For decades Nigerian leaders echoed an African sentiment about the accelerating demographics of the continent’s fastest population, that “we have an abundance of human capital.” This was usually with reference to merely the population headcount rather than the productivity of our people, reflecting a grave misjudgment in equating Nigeria’s population with its human capital’s capacity for productivity.

So, at the beginning of 2018, I mulled over what will form the basis of our message and the thrust of our advocacy. After consulting with our faculty of economists, we agreed on “Growing Beyond Numbers: Will Nigeria’s Growth Be Inclusive in 2018 and Beyond?" When the NESG Board met with President Muhammadu Buhari, this was the core of our message.

Sometime between 2045 and 2050, Nigeria’s population is expected to overtake the population of the United States. Africa’s most populous nation will be dealing with a demographic emergency that has a potential to destabilise sub-Saharan Africa with interlocking vulnerabilities for neighbour countries and cascading consequences for the largest youngest population per square kilometre.

If the last decade is anything to go by, failure to invest in people may create complexities of a scale that maybe impossible to manage in the future, if we do not act now. Between 2007 and 2017, two armed conflicts in the Niger Delta and the North East were fuelled into existence by extremely poor communities, highly illiterate youth and highly vulnerable young populations in narratives of insurgency, extremism, and anti-state behaviour found ready-acceptance.

These are lessons we must learn and vulnerabilities we must minimize. According to the African Development Bank, of the 10 million young Africans that enter the labor market annually, 3 million are Nigerians. With several decades of jobless growth, expanding the economic opportunities to absorb the current jobless population and future entrants is a socio-economic security imperative.

The solution to this challenge is “develop people into human capital” through a collaborative effort between government and business in investing in broad-based inclusive growth across non-oil sectors, demand-led workforce skills development to enhance equal socio-economic opportunity, and the development of a welfare state with a robust social security and investment system (that guarantees universal access to basic healthcare and education).

The political leadership challenge will be reducing the effects of political corruption and patronage that currently fills the vacuum created by lack of social safety nets. The policy leadership challenge will be addressing unemployment, underemployment, and poverty by expanding the policy space to stimulate job creation and productivity within sectors, leveraging the right fiscal tools to mobilize and optimize domestic and internal resources; and apply revenues to targeted interventions that encourage labor shifts from low- to high-productivity sectors.

This will require both skills and technology leapfrogging. And to do so with a sense of urgency. In this regard, my deepest passion has been working with government and business leaders to diversify the economy into labor intensive sectors through national technical and vocational training and capacity building programs.

We also need to nurture our human capital by improving access to social services. This will mean, for example, rethinking the allocation of resources to primary healthcare centers, where old geographical considerations must give way to headcount-based planning of healthcare access. We can use income group targeting to redesign social investments that work differently to create a healthier and more productive population.

This is what it will take to convert our demographic emergency into demographic opportunity through the development of our human capital. This is not only possible; it is the only sustainable policy option for the future. Strategic investments in human capital development cannot be merely throwing resources at the problem; it must reflect a deep understanding of what has not worked, what works, and a commitment to innovate and think differently about our most formidable problems.

This week, Dana Hovig director of Integrated Delivery will be among the thousands of leaders and global health experts gathering in Kazakhstan to reaffirm their commitment to the Alma-Ata Declaration. The conference will be a chance to celebrate the global health successes of the past 40 years—progress in vaccines, family planning, malaria, HIV treatment, and more—while also exploring what next steps are needed to finally achieve health for all.
Ryan Bell Feature Writer, Bill & Melinda Gates Foundation

The demographic dividend and youth in sub-Saharan Africa

2018 marks the final year of the African Youth Decade. If the vision and mission of the African Union are to be realized, Africa needs deliberate efforts to accelerate social development that give high priority to youth empowerment and development.
Anastasia Gage Professor, Department of Global Community Health and Behavioral Sciences, Tulane University School of Public Health and Tropical Medicine
Sign up for The Optimist newsletter
Subscribe to The Optimist to get weekly updates on the latest in global health, gender equality, education, and more.