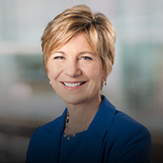 I remember feeling both excited and anxious about becoming CEO. I did what I always do at such moments—I studied. It was fun recently to look over the notebook I’d kept from the time, with references to Edward Jenner and the history of vaccines, the two types of polio vaccine, and the books I’d read, which included an account of India’s rise and a history of Ethiopia. It wasn’t all academic study. Since I was moving to Seattle, I’d also added Where’d You Go, Bernadette? to my reading list.

After five years in the job, I certainly know a lot more about vaccines, India, Ethiopia, myriad other global health issues—and life in the Pacific Northwest. On a personal note, I had a wonderfully collaborative experience putting together a talk on my idea for precision public health that I gave on the main stage at the TED conference in Vancouver. And to Bill’s point, our foundation also racked up some significant successes with our partners that we might not have imagined were possible.

In fact, I started making a list of achievements the foundation has had a part in over the last five years—and gave up when I got to 100.

Among the highlights: Gavi, the Vaccine Alliance, and the Global Fund to Fight AIDS, Tuberculosis and Malaria were both replenished with $7.5 billion and $12.9 billion respectively. There was also the first new treatment for relapsing malaria in 60 years, the first all-oral treatment for sleeping sickness, and a Guinness World Records for drug donations.

We launched Goalkeepers, our foundation’s annual accountability check on progress toward the Sustainable Development Goals; three new strategies—Gender Equality, U.S. Economic Mobility and Opportunity, and Global Education; and opened the Gates Medical Research Institute—the first non-profit biotech—to speed the time it takes to get treatments from the lab to the field.

These are great achievements, and of course it’s not always been smooth sailing. I will never forget our joy that Nigeria was no longer considered polio-endemic turned to frustration as cases re-emerged less than a year later. Progress on malaria has also stagnated in the last couple of years. And a viable HIV vaccine looks to be a longer time coming than originally hoped. In a time of economic challenges, all of us involved in global health have our work cut out making sure funding is available from donor governments to continue the success of Gavi, the Global Fund, the Global Polio Eradication Initiative and the Global Financing Facility.

So, five years on, there is still plenty of work ahead if we want to make good on our foundation’s vision of a world where everyone has the chance to lead a healthy, productive life. And the truth is, the world isn’t going to achieve its health and development goals by doing the same things the same way. Progress on the scale we’ve set ourselves will require alternative approaches, innovative investments, original ideas, scientific discoveries and technological advances.

In that spirit, I asked the presidents of our four global divisions—Global Policy and Advocacy, Global Growth and Opportunity, Global Health, and Global Development—to dream about what achievements we might be able to celebrate five years from now. Here’s what they came back with: China’s aid agency will be the second largest funder of multilateral health and development programs; a new financial system will close the gender gap; the global burden of malaria will be cut in half again; and polio will be wiped off the planet.

These are big dreams but I’m optimistic they can become a reality for one reason. The biggest lesson I’ve learned in my time as Gates Foundation CEO is that our greatest asset is not actually our voice or our resources—significant though they are—but our people and our partners. Working together, I’m excited about the difference we can make in the next five years.

Some of the most significant breakthroughs in 2018 came in the field of vaccine development and delivery, where we again saw progress on immunization. Today, more people in the poorest parts of the world, especially children, are getting protected against infectious diseases, while new innovations are producing vaccines more cheaply and getting them to the communities who need them more effectively.
Michael Lea Senior Writer, Bill & Melinda Gates Foundation

While the Global Polio Eradication Initiative’s new strategy is being finalized, India is in the midst of its own health campaign that uses the polio eradication playbook to take on a new health challenge, a neglected tropical disease called lymphatic filariasis.
Ryan Bell Feature Writer, Bill & Melinda Gates Foundation